* The hiragana up there is read as ‘nisekoi’*

The following is a reaction response to the first episode to the anime ‘Nisekoi’, released on 11 Jan, 2014 by studio Shaft.

It is a reaction post, it obviously has spoilers.

The series opens with a little scene displayed as if shot on a cellulite film reel. A smart approach to showcase an event that transpired years ago. A black and white  (except for stills of the lock pendant and the terrain) ,silent short where two children promise to meet again and get married. Because it is perfectly fine to talk about marriage when you are barely eight years old. 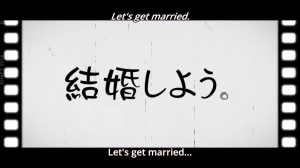 I have never seen better animated cooking in , well, anime, jealous much ‘Yakitate Japan‘?. The animation is fluid and works brilliantly with things like the sound of noodles hitting hot oil, the sound and effect of the knife against the chopping board and yeah I bet you are hungry now.

So the protagonist Raku Ichijou prepares this amazing breakfast and introduces us to a family background quite reminiscent of Gokusen days. A sincere moralistic ambitious young man, who, in the words of the wonderful fun subbers at [horriblesubs], ‘wants to graduate from a top University, get a steady job as a civil servant, and walk straight and narrow, looking right up at the sun’, is by luck, born in a yakuza (Japanese Mafia) family. Cool right? (OMG, deja vu!, Shikamaru Nara had an almost similar moment, 10 points to the Naru-tard that can tell me when) 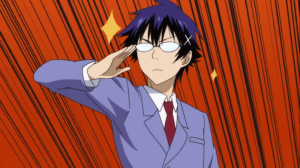 I know its only the first episode, but would it kill you to actually develop this aspect of Raku’s life a little more. But he doesn’t have to hide it like Yankumi (Gokusen), so I guess making it a big deal would be a waste of time.

So we move on to get the first glimpse of our female lead – Chitoge. Or at least that of her head with those weird pink streaks on honey blonde hair, which can be treated as a standard representation of American teenagers in Japan. The first few shots scream ‘bishie’ and are the extremely anime-esque sequence of a girl in a sailor fuku running late with her breakfast in mouth….I guess. 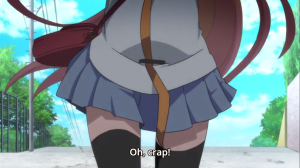 Oh  crap! What is that on her blouse?

So, Chitoge knees him in the face and then runs off and turns out to be the transfer student in ……his ……………class.

I swear I have seen that before! (10 more points if you can figure out where, think mahou shoujo)

The anime doesnt seem to have much in terms of story as of yet. Two children parted ten years ago  on the promise to one day meet again, and form what I could fathom, open a time capsule of some sort. The boy is now in high school, meets a whacko chick who uses him as a punching bag. Oh and this other chick might be the little girl with the key pendant…………..and oh I really couldnt care less about the storyline. 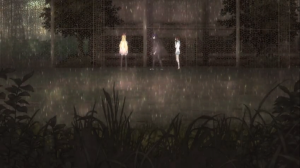 Aaand there is really predictable twist at the end. 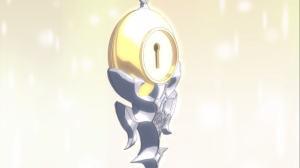 (all because of that stupid locket. Get it, lock-et?)

But dont let my disinterested tone put you off. The show uses a lot of things that actually work for it. The miss timed scene switching which makes character interactions look abrupt, actually renders a sort of peppiness to the show which is balanced beautifully by the artistic background hurled at your face every once in a while. 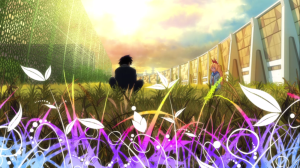 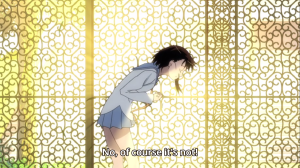 The pot-pourri of various animation styles works well and makes up for more than the great disaster the story is for the show. Unfortunately, the animator’s obsession with glowing shapes made me blind halfway through. Heck the characters spout sparkle as they speak. Sparkle……..effing……………..uh, nevermind. 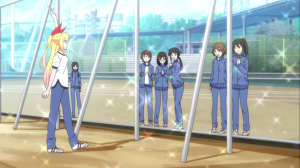 The number of instances and the quantity of glowing shape thingy can compete with the amount of lens flares in the reboot star trek movies.

The show is fun to watch. The characters are interesting and entertaining. The animation can be a little choppy at times, but the arty backgrounds make up for it. The ending song for the first episode is pretty good, but nothing commendable.

Watch it. I know I will.

Published by Daena May

One step at a time. View all posts by Daena May

What do you think? Cancel reply